It really is about the economy

In the brouhaha of recent days much emphasis has been, rightly, placed on the way in which trade could continue to be carried out across the Irish border. For those not acquainted with such matters there has been great explanation of the meaning of customs unions, ‘regulatory alignment’ and the effects that tariffs would have if they were imposed in the event of a no-deal when World Trade Organisation (WTO) rules might apply.

Ultimately, what seemed to have spooked the current government led by current PM Boris Johnson, in a way similar to predecessor Theresa May, is the realisation that, whatever may be claimed, the UK leaving the EU with no-deal would be economically catastrophic. Though the notion of ‘going it alone’ is certainly feasible, recovery from the consequences caused by the uncertainty of ‘crashing out’ on Halloween would place immense strain on the UK’s immediate prospects.

The world is already facing economic uncertainty due to the on-off trade war that has been smouldering between the US and China. In the long-run cycles we’re were due to see a slowdown and a slew of data produced in recent months demonstrates that indicators such as investment has dipped which further undermines prospects.

As has been pointed out by many commentators, myself included, one of the significant factors in influencing the leave vote in traditional Labour areas was disillusionment with the effects of austerity introduced by the Conservative-LibDem coalition government of Cameron and Clegg. This made people poorer. Ironically, however, the vote to leave has made them even poorer as it’s estimated by respected economic analysts the Institute of Financial Studies (IFS), that we’ve lost between £55 and £66 billion from the economy since June 2016.

Add in recent ONS data showing that we are on the verge of a “productivity recession” due to factories recording a drop of 0.5% over the last year which, combined with a 12 month period of zero growth in output per hour, means we’re not in great shape to even recover from the ravages of the Global Financial Crisis.

Though it’s expected that the UK may avoid a recession because, over the three months to the end of August, the economy grew by 0.3%, there is a sense that it would not take much to reverse this growth. Research carried out by the IFS published last week assert that every form of Brexit has the potential for making things a good deal worse.

Benjamin Nabarro and Christian Schulz from the IFS have considered what the economic outlook for the UK are likely to be in four “Brexit scenarios” and the conditions that will face whichever government is in power after the general election that is inevitable. The four scenarios examined by Nabarro and Schulz are: continued uncertainty; a no-deal scenario accompanied by significant fiscal loosening; a negotiated Brexit deal passed through the current parliament; a second referendum on a Brexit deal negotiated by a Labour-led coalition, culminating in a vote to remain.

The diagram, using 2019 as a baseline, suggests what the likely impact will be for the UK economy over the next three years to 2022: 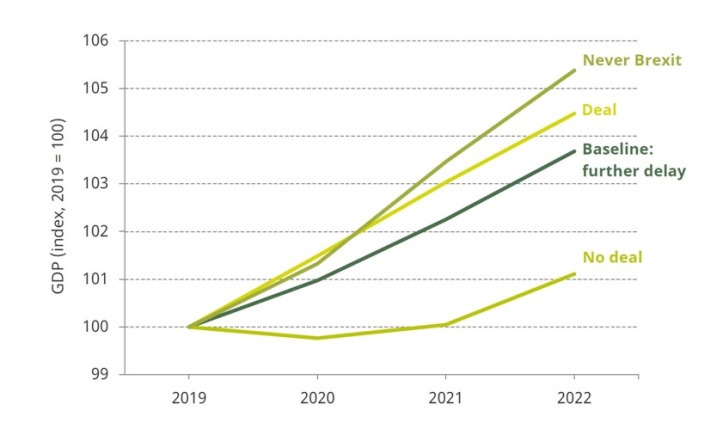 As Nabarro and Schulz surmise, a ‘no Brexit’ in which there is a Labour-led coalition government that introduces “significant tax and spending giveaways but does not implement all of the more radical structural reforms outlined in Labour’s 2017 manifesto”, provides the most positive scenario. Nabarro and Schulz believe that it is possible that growth of 2% a year might be possible.

The ability of the UK to be able to leave the EU with a deal, currently regarded as the favoured outcome, will ensure, according to Nabarro and Schulz, would, if accompanied with tax cuts and more spending increases, worth between 1-1.5% of GDP “over and above the loosening at the September 2019 Spending Round”, would produce, as they acknowledge, a relatively poor 1.5% growth per year. It’s worth pointing out that they believe that investment decisions that have been put off will probably occur that will increase consumer confidence which has been so important to GDP in recent years.

Nabarro and Schulz suggest that in the ‘baseline’ scenario, in which there is continued delay to Brexit, they assume additional fiscal loosening of 1-2% of GDP coupled with small interest rate cuts. They believe that growth will be below 1% in 2020 and though increasingly slightly, “remains very poor” at less than 1.5% in 2021 and 2022.

It will be no surprise that a ‘no-deal’ Brexit is thought to be the worst-case scenario by Nabarro and Schulz. As they argue, this will be likely “even under a relatively benign scenario” of a Conservative-led government in which further fiscal loosening worth 2% of GDP occurs, together with interest rates being cut to zero as well as £50 billion of quantitative easing.

Nabarro and Schulz’s view of the consequence of ‘no-deal’ will be further reductions in investment as well as fall in consumption as people pull their ‘belts in’. They suggest that the economy flatlines over the next couple of two years and would increase by a 1.1% in 2022. The result will be that the UK economy is 2.5% smaller in 2022 that it would be compared to their baseline.

There is undoubtedly a sense among a good proportion of the public and a majority of MPs that anything other than leaving with no-deal will be a good outcome to Brexit. However, as many commentators point out, this should not blind us to the fact that, as Nabarro and Schulz’s work shows, any Brexit will make the UK worse off than if it had remained in the EU.

Writing in The Observer over the weekend, Anand Menon and Jonathan Portes, academics at King’s College, London representing think-tank The UK in a Changing Europe, in an article titled ‘Boris Johnson’s Brexit deal will make people worse off. As the explain, leaving the EU with the ‘Johnson deal’ that’s emerged following his meeting in the Wirral last Thursday with Taoiseach Leo Varadkar, would potentially reduce GDP by almost £49 billion.

This they contend, would mean a reduction per capita drop in GDP of 6.4% when compared to remaining in the EU; the equivalent of £2,000 for every person in the UK. Significantly, they have compared what’s proposed by Johnson to the deal that Theresa May negotiated with the EU but was rejected three times by Parliament. Accordingly, their research indicates that should Johnson’s deal become reality there would be a reduction per capita in GDP of 6.4% as opposed to 4.9% had May’s deal been agreed.

The reason for this difference, they explain, based on a report they publish in a report for The UK in a Changing Europe, is due to the fact that Theresa May’s WA provided a way for there to a long-term relationship based on a shared customs territory and close regulatory alignment on goods. Menon and Portes cite a letter that Johnson wrote to Jean-Claude Juncker in which he states that the backstop acted as a “bridge” that would tie the UK to the EU through customs arrangements and laws.

A close relationship with the EU is something Johnson eschews. His letter specifically asserts that this is contrary to the current government ‘s objectives of taking control over “its own regulatory affairs and trade policy.” Menon and Portes believe that “relative both to the status quo of EU membership and to May’s proposals, the economic impact of Johnson’s proposals would be significant and negative.”:

“Based on the reduction in trade alone, under May’s deal (assuming no productivity effect, on which more in a moment) income per capita would have been 1.7% lower than under membership. The equivalent figure for the Johnson deal is 2.5%, while that for a World Trade Organization Brexit (no trade deal at all) is 3.3%.

“However, economists are convinced that reductions in trade also affect productivity. The literature suggests that a 1% decline in trade reduces income per capita by about 0.5%. If, then, we combine this productivity effect with the trade impacts summarised above, we arrive at per capita GDP figures of -4.9%, -6.4% and -8.1% for May’s deal, Johnson’s proposals and a WTO Brexit respectively, as compared with membership.”

Menon and Portes provide caveats to their findings and are aware that forecasts are necessarily based on assumptions that have habit of not being correct; what has led to those who claim so called ‘project fear’ was based on exaggerated fears. Nonetheless, they believe that their research indicates that, like the IFS, impact on income per capita is negative in types of Brexit scenarios, but that what Johnson is proposing as a way to end the Brexit impasse will “sit somewhere between May’s deal and a WTO scenario.”

This view is shared by big business who have sent a letter to Brexit secretary Steve Barclay and Cabinet Office minister Michael Gove warning of the “damage which would be done by the current approach on regulatory divergence”. This letter, sent by the representatives of the aerospace, automotive, chemical, food and drink and pharmaceutical sectors, collectively employing 1.1 million, warned that Johnson’s stated position of walking away from commitments to remain aligned to EU regulatory institutions pose a “serious risk to competitiveness.”

We are becoming increasingly aware of the chaos that Brexit is causing. In the past week we’ve heard of food rotting in fields due to the inability of farmers in being able to recruit EU workers to pick fruit. It was reported in trade journal The Grocer that there is a 30% shortage of workers required to harvesting autumn crops such as berries, apples and beans.

Brexit will continue to produce such chaos and, of course, the potential for the UK crashing out on 31st October, especially if the EU becomes exasperated with the inability of the UK to propose coherent proposals for leaving are rejected. That EU chief negotiator Michel Barnier has today (Tuesday), set a deadline of midnight deadline for the UK to concede to EU demands that a customs border is set in the Irish Sea suggests that Johnson will face a new crisis.

This would mean that there would be nothing substantive of any WA being agreed by EU leaders at its summit on Thursday. Crucially there would be nothing for MPs to consider when they sit on Saturday. On that assumption, and in order to avoid a no-deal exit, Johnson would then be required to abide by the Benn Act and seek an extension.

As the IFS research carried out shows, continued delay is most definitely better than no-deal. Significantly, though, as analysts Nabarro and Schulz from the IFS and Menon and Portes from UK in a Changing Europe, to name but two, clearly demonstrate in the research they have carried out, the UK’s economy, and therefore the future prospects of us all, are best served by remaining in the EU.

Should there ever be another referendum, and given all the evidence, it’s hard to believe that people would vote by a majority to make themselves poorer. However, under all scenarios apart from remaining in the EU, that is exactly what will happen.

The next few days are going to provide an answer as to what fate awaits us in the coming months and years.