John Redwood: That figure on the side of a bus and driving it to a surprise victory

We are pleased to be sharing an incredibly interesting extract from Member of Parliament for Wokingham Sir John Redwood’s new Bite-Size book.

Titled ‘We Don’t Believe You: Why Populists and the Establishment See the World Differently’, the book gives us fresh insights into why the populist movements and parties have been winning elections.

Sir John looks at how the experts and narrative pushed out by the established elites on both sides of the Atlantic have met with disbelief as well as with strong opposition. He shows how great parties have been all but destroyed as election winning forces as new movements and people sweep them aside. From the establishment himself as an expert and a member of one of the traditional parties, he seeks to show how the sensible elites adjust and respond to new moods and new ideas instead of confronting or denying them.

Enjoy an extract from the book below: 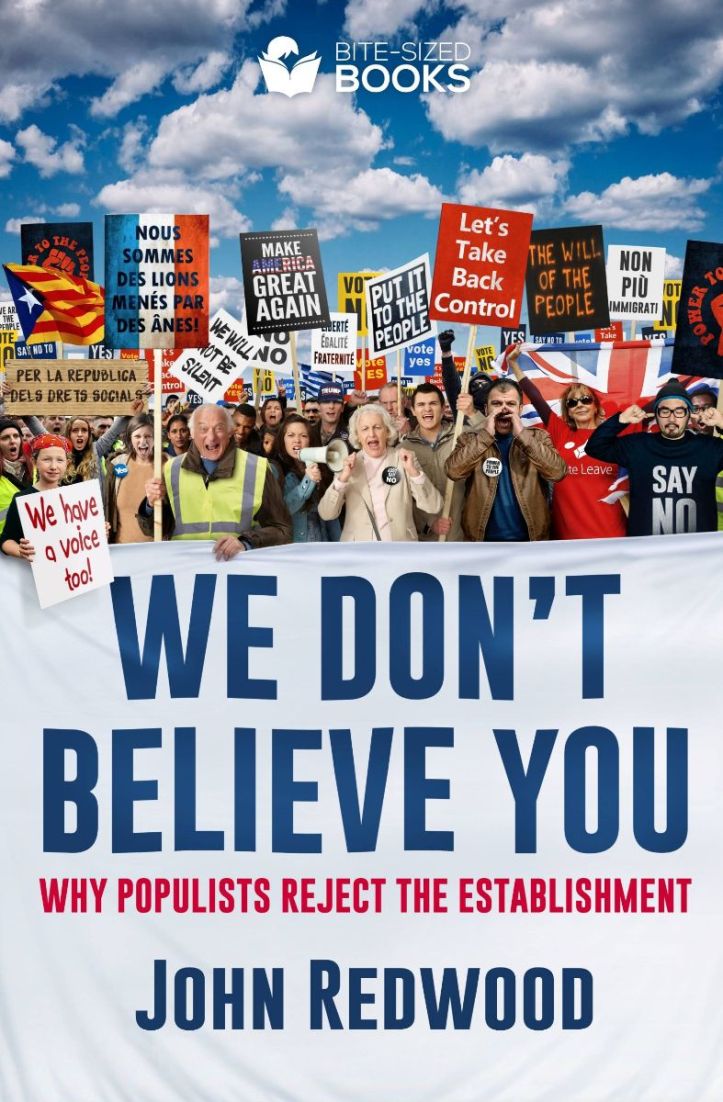 Because Vote Leave in some of its materials and on the side of a bus used the then gross figure of UK contributions without netting off the money the UK got back, Remain made this the issue.

Many Leave spokesmen were always careful to give the net figure as well as defending the gross figure as the official figure, but it meant the interview was often about the number rather than about the principle or about how the UK might spend all that money.

Some in the Leave campaign had argued for only using the net figure. The argument for using the gross was it did mean the interviewers kept coming back to it, reminding people that a large sum was at stake.

Most neutral people listening to the exchanges would have gone for the net not the gross figure. Anyone listening even after the attempted demolition job by Remain would also have understood that we would be better off by a large sum if we just left, assuming all else stayed the same.

What was fascinating during the campaign was seeing how much better an understanding voters had of the sovereignty issue than the elite wished them to have.

There was widespread understanding of the nature of the EU project, with many recognising this was not the common market of the Remain campaign’s dreams. There was also a realism or cynicism about the EU’s trade and economic offer, with many thinking it was designed to help them more than the UK.

There was general resentment at the way our fishing and farming industries had been treated, at the disadvantageous financial settlement, and the bully tactics often used to put through taxes and laws that people did not like.

The fact that Remain had not used their 45 years of bliss in the EU to explain its advantages to the pubic set them up for a fall when it came to Judgement Day.

Voters remembered the big decline in the fishing industry, the banning of UK beef, the long arguments about the substantial financial contributions and the parliamentary battles over each successive treaty and the powers it transferred to the continent.

A bolt from the blue

The result of the referendum came as a bolt from the blue for the establishment.

The BBC cancelled or shortened interviews planned with Eurosceptics, as they had been invited to portray them in defeat, not in victory. Instead of taking defeat well many Remain media outlets, politicians and campaigners carried on pouring out their negative materials about Brexit as if they were still fighting the referendum.

It never occurred to them that maybe it was the whole tenor of their negative campaign that had contributed to their downfall. Indeed, to this day many have carried on trying to derail Brexit and are now pushing for a second referendum on the same issue.

They are scornful of all who voted Leave, and believe if voters were made to do it again they would repent and see it their way. Gone are the fine words before the vote that the people would decide in a once in a generation vote. No-one for one moment thinks they would have offered Leave a second shot if they had lost.

The idea that the UK needs a second referendum is a curious development. The forces of Remain and the EU recognise the ultimate sovereignty of the people, so they see that if they are to have their way and keep the UK in the EU there needs to an official reversal of the verdict in the vote.

Their problem is in deciding what the question should be and in persuading enough people and MPs that this is now a necessity.

Some in the Remain camp favour a three-way vote. They say the country now knows more about leaving than in the original debate. They want the public to decide whether to accept the withdrawal agreement offered by the EU and the further 21 to 45 months of talks about a future partnership, or to stay in the EU by cancelling the Article 50 notification of departure, or to leave with no agreement.

There are several problems with this approach.

The first is the winning proposal might only attract 34% support, leaving almost two thirds of the public angry or unhappy about the outcome.

The second is the establishment proposal of signing the withdrawal agreement leaves the country with many more months of uncertainty and no knowledge of what leave will then looks like as all rests to be agreed after the event.

The first of these effectively disenfranchises the majority who voted Leave, as there is no proper Leave option on the ballot paper. The second leads many voters to ask why they have to do it all again, as they meant what they voted the first time round. It looks arrogant to say to voters they did not know what they were doing and need to think again.

Most supporters of a second referendum are Remain voters who wish to reverse the decision. The overwhelming majority of Leave voters are happy with their choice and frustrated at the delay in implementing it. Their most common phrase in response is “Just get on with it”.

The establishment’s attempts have been intense to dilute or cancel Brexit. They never made a passionate or honest case for membership all the time the UK was in it. They always played down the more visionary parts of it, or made sure the UK was opted out of them for fear of public retribution. Now membership is to be taken away, they still lecture the country on the mistake the majority made in their view. The Leave voters are busily saying to Remain, “We still don’t believe you”.

The establishment lost a battle which it did not properly engage in. Its’ phoney forecasts, silly scares and arrogant assumption it would it win have left it damaged.

Leave remains anxious that somehow even at the last minute it will be cheated from its determination to rebuild an accountable democracy in the UK. This remains one of the most intense battles between the elite and the populists.

We Don’t Believe You: Why Populists and the Establishment See the World Differently is available now in Paperback and digitally on Kindle. Find out more here.